What Are the Elderly Thinking? 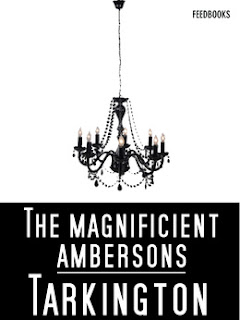 The last several days have found me musing on several passages from Booth Tarkington’s The Magnificent Ambersons, the penetrating and prescient novel he wrote in 1918 about the rise and fall of an aristocratic American family.  But one scene has been in my thoughts more than any other, probably because of our ongoing involvement with “When Swing Was King” as well as an upcoming interview Focus on the Family has scheduled to talk with us about nursing home outreach and other ministries to seniors.

The scene features the elderly Major Amberson, who is suffering from grief and loneliness as well as from the inevitable ravages of old age.  He sits for hours staring at the fire -- awake and yet generally disconnected from anything that’s happening around him.  The other family members assume that he is in some kind of mental limbo. If any cognizant thoughts do slip through, the family believes they are the Major's memories of his military service, the building of his business, or sweet dreams of his wife who died long ago.

They were mistaken.  The Major was engaged in the profoundest thinking of his life.  No business plans which had ever absorbed him could compare in momentousness with the plans that absorbed him now, for he had to plan on how to enter the unknown country where he was not even sure of being recognized as an Amberson...

His absorption produced the outward effect of reverie, but of course it was not.  The Major was occupied with the first really important matter that had taken his attention since he came home invalided after the Gettysburg campaign, and went into business; and he realized that everything which had worried him or delighted him during this lifetime  between then and to-day – all his buying and building and trading and banking – that it all was trifling and waste beside what concerned him now.

A few pages later this scene (and Major Amberson's life) reaches its climax.

He moved his hand uncertainly as if reaching for something, and George jumped up, "Did you want anything, grandfather?"

"No – no.  No; I don’t want anything."  The reaching hand dropped back upon the arm of the chair, and he relapsed into silence; but a few minutes later he finished the sentence he had begun:

"I wish – somebody could tell me!"

The next day he had a slight cold, but he seemed annoyed when his son suggested calling the doctor, and Amberson let him have his own way so far, in fact, that after he had got up and dressed, the following morning, he was all alone when he went away to find out what he hadn’t been able to think out – all those things he had wished "somebody" would tell him.

Old Sam, shuffling in with the breakfast tray, found the Major in his accustomed easy-chair by the fireplace – and yet even the old servant could see instantly that the Major was not there.

I think you can see why I found The Magnificent Ambersons a valuable read.  And I think you can see why I find that particular scene so compelling, evoking as it does so many thoughts and feelings connected to my own loved ones even as I'm moved also to think about the elderly friends Claire and I are making in our regular visits to assisted living centers and nursing homes.

The applications are limited, I understand that.  For instance, not every nursing home resident is involved in the same intense search for life’s meaning as was Major Amberson.  And some of those who are seemingly “locked inside” frail bodies and minds are genuinely out of our reach. Some – but not all!  That’s extremely important to appreciate.  So too is the fact that we are usually unable to determine exactly what’s going on inside a person's mind.  Therefore, mercy would direct us to give such souls the benefit of the doubt, moving us to speak, touch and pray for the person until the very end.

Another important point is that explaining spiritual truths to genuine seekers like Major Amberson (serving as the “somebody” who can tell them the answers to spiritual questions), requires sincerity, patience, prayer, and the willingness to win the right to be heard.  This is true of all evangelism and discipleship ministry.  In regards to hospital or nursing home visitation, the ministering Christian must be willing to be a genuine friend, to take the time necessary to shine forth the fruits of the Holy Spirit, and to demonstrate appropriate sensitivity to others involved, including family members and facility staff.

But with these practical issues accepted, the yearning for spiritual truth exhibited by Major Amberson should move all Christians to remember the important mission field our senior citizens represent.  And, for that matter, we must not overlook those younger citizens who are forced by disease or accident to also require the ongoing care provided by a nursing home.  These places are all around us with every one of them filled with people who need our attention, our love in action, and yes, our answers to their questions about “that unknown country” that lies behind death.