Saying "NO" to Starbucks 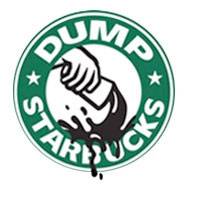 On January 24th, 2012, Starbucks issued a memorandum declaring that same-sex marriage "is core to who we are and what we value as a company."

Starbucks also used its resources to participate in a legal case seeking to overturn a federal law declaring marriage as the union of one man and one woman.

In many areas of the world where Starbucks does business, the concept of 'gay marriage' is unheard of and deeply offensive to cultural, moral and religious values.

In taking these actions, Starbucks has declared a culture war on all people of faith (and millions of others) who believe that the institution of marriage as one man and one woman is worth preserving.

A portion of every cup of coffee purchased at a Starbucks anywhere in the world goes to fund this corporate assault on marriage.

We urge consumers across the globe to join the 'Dump Starbucks' campaign.

Okay, that's the "why" to oppose Starbucks as described at the Dump Starbucks website. What about the "how" of the matter? Well, besides the obvious (namely, no longer patronizing the coffee shops or Starbucks products), I suggest that you fully utilize the range of actions outlined at the Dump Starbucks site. For example, at the site you can sign an e-petition and get contact info for letters and calls to the company headquarters and individual Starbucks stores.

As I've pointed out before, I have been boycotting Starbucks since 2005. And it's not merely because of the company promoting a culturally corrosive homosexual agenda. I'm also bothered, as I underscored back in 2007, "by the company's exorbitant product markups, their very poor record regarding free trade, and the ongoing matter of underpaying their employees."

That's why I'm very pleased at the development of the Dump Starbucks campaign which I've been touting since March ("Eliminating Starbucks Is Good for Your (Moral) Health").

I'm asking you to join us and to pass the word along to others. And the Dump Starbucks site is definitely the place to begin.
Posted by DH at 9:33 AM