Is the U.S. Leaving Chen's Fate to Red China? 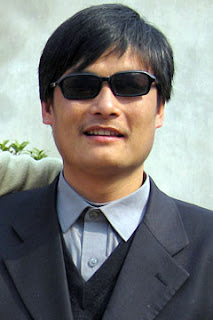 It should have been obvious to U.S. officials all along that there is no way to guarantee Mr. Chen's safety so long as he is within reach of the Chinese police state. The U.S. should not have given in to Chinese pressure for Chen to be taken out of the safety of the U.S. embassy.

This case is a high-profile reminder of the terrible human rights situation in China that too often has gone unchallenged by the United States," she said. "Time and again, U.S. officials have chosen not to raise the Chinese regime’s abuse of dissidents, brutal forced abortion policy, suppression of free speech, and denial of basic human rights.

The administration must support Mr. Chen's freedom to choose where he and his family can live in safety. Failing to ensure Mr. Chen's safety would send a negative message to all those around the world struggling against oppression, and make them question whether the United States will stand with them or their oppressors.

Also making a joint statement were Republican Senators Kelly Ayotte and Lindsey Graham who called on Obama to grant Chen and his family political asylum in the United States. "Chen has bravely stood up to the Chinese government and protested its abhorrent human rights practices. The U.S. should never apologize for promoting human rights and protecting courageous human rights activists like Chen."

The senators said they would introduce a resolution when the Senate is back in session Monday "expressing support for Chen and calling on the Chinese government to end the persecution of human rights activists and their families."

And as for Democrat voices defending Chen? We're still waiting.

(For updates of Chen's fight for freedom, I'd suggest checking the China Aid website.)
Posted by DH at 10:08 AM