Did a Spy Drone Almost Bring Down an Passenger Plane? 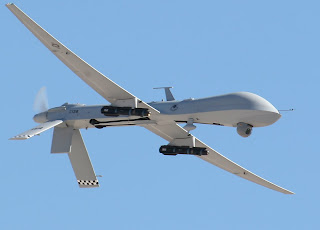 Those UFOs that have taken to the skies recently ("spy" drones put up by the FBI and other agencies) have alarmed a lot of people. Concerns about privacy, civil liberties, government expense and so on have been cited by Americans worrying about what this new development might involve.

Well, you can add another group of folks that are going to be worrying a great deal about the new Nanny State gadgetry. And that group is airline travelers.

Here's an instance of a drone flying at over 8,000 feet almost bringing down a passenger plane over Denver.

Good grief. As if the government didn't hassle you enough in the airports through its groping TSA agents, it looks like it may now become a bother even when you're in the air!
Posted by DH at 9:54 AM