Arbor Day vs Earth Day: "The Earth Is the Lord's" 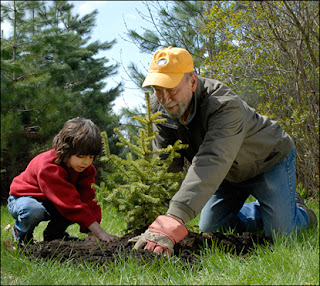 "In 1872, right here in the state of Nebraska, a journalist turned politician began a campaign that he hoped would help stabilize and beautify the rather sparse landscape of his state.  The man was a Nebraska City resident who believed that such a campaign would be a good idea in other places too.  And it was.

J. Sterling Morton’s call for tree husbandry was answered by the National Agricultural Convention meeting in St. Louis that year and by numerous municipalities, newspaper editors and thousands of citizens.  The result was that the very first Arbor Day, April 22, saw almost a million trees planted.

But though J. Sterling Morton was a tree planter extraordinaire, he was not a tree hugger.  His attitude towards the natural world was the traditional one; namely, that the earth was the Lord’s and man, acting as God’s servant, was to effectively oversee nature, to subdue it in a rational way, to beautify it and properly benefit from it.

Morton was thus acting in accordance with the biblical mandate – the program originally given to Adam in the garden of Eden – a call to responsibly appreciate, nurture and enjoy the created things with which God had adorned the earth.

And most of the people who answered the challenge of Arbor Day were operating in the same spirit.  They were planting trees because trees were good things.  They bore fruit that man could eat.  They helped with soil conservation and provided protection from wind.  And they were pretty.

These people understood that trees were pleasant and productive plants – but they were for man’s use.  They were good things, not fellow souls.

Indeed, J. Sterling Morton (a conservative Democrat who served as Secretary of Agriculture under Grover Cleveland and whose son became a prominent Republican who was Secretary of the Navy under Theodore Roosevelt) was a faithful Episcopalian.  His understanding of the monumental difference between man (created in the express image of God) and nature (created for the enjoyment and benefit of man) was part of the basic Christian worldview.

The kind of conservation ethic he represented was rational, healthy, farseeing and well-rooted in sound environmental ideas.  It was the same enlightened conservation ethic of farmers like George Washington and Thomas Jefferson, Johnny Appleseed, Teddy Roosevelt and other sportsmen who led the way in establishing our national parks and wildlife refuges. It was part of the longstanding tradition of taking care of the environment for man’s use – not for nature’s sake.  It was the perspective of the farmer, the rancher, the hunter and fishermen – be responsible and take care of the environment in order that man – both in the now and in the future – may be best served.

Thus, Arbor Day was – and, by the way, still is – a responsible event, one that calls for individual volunteer efforts – not government coercion.  In fact, the people associated with Arbor Day are decidedly apolitical.  “The only stand we take,” says an official with the Arbor Day Foundation, “is that it’s a great thing to plant trees.”  No demands for government intrusion.  No insistence on group think.  No call for Nanny State regulations and taxes.

What a dramatic difference this is from the “holiday” that has tried to bully its way over and past Arbor Day, the extremely political and propagandist and coercive event that pirated the same day, April 22, and now tries to crowd out the very memory of Arbor Day. That event of course, is Earth Day.  Or as the United Nations calls it International Mother Earth Day..."

The above paragraphs represent the introduction to my sermon from last Sunday. It was a sermon entitled, "The Earth Is the Lord's" and it went on from here to discuss the socialist (oftentimes, pantheistic) philosophy of Earth Day, the facts about who the true heroes of American environmentalism are (hunters and fisherman), and several Scriptures which deal with God as the Creator and Sovereign King of the earth.

Also spoken of is the glory of God revealed in His creation, the necessity of man serving as responsible steward of the natural order, and the eventual destruction of the earth which occurs not through man's ecological failure but rather by the holy judgment of God. This just before He creates a new heaven and, yes, a brand new earth.

We will eventually get round to typing up my notes but if you're interested in listening to the sermon, you can do so right now...right here.
Posted by DH at 10:52 AM