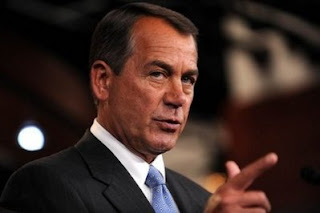 Jake Sherman at Politico has an excellent recap of the Washington Post's surprising story from last weekend that upholds the Republican version of what happened in last year's showdown between John Boehner and Barack Obama.

You heard right. The Washington Post backed Boehner and blamed Barack. And the Post isn't the only establishment media that's underscoring this critical point even though it's bound to hurt Mr. Obama in the run up to the election.

Here's a bit of Sherman's review:

The verdict is in: Team Boehner has taken Round One of the great journalistic reconstruction of last year’s failed debt talks.

Eight months after deficit talks between the nation’s top two elected officials collapsed, a 4,600-word inside-the-room narrative by The Washington Post on Sunday — the first of several sweeping accounts in the works — paints the Obama administration as walking away from a nearly done agreement with Boehner. And when the president eventually came around and wanted to cut a deal, Boehner said it was too late.

In short, the Post piece bolsters the Boehner team’s narrative that it was Obama who got cold feet and became unwilling to strike a grand bargain to fix the nation’s finances.

The efforts by several prominent journalists to revisit last year’s high-stakes talks — the New York Times Magazine’s Matt Bai is working on a similar piece, and Bob Woodward is writing a book on Obama’s handling of the economy — promise sustained attention on a critical moment of Obama’s first term that could factor into his reelection prospects.

The negotiations with House Republicans were Obama’s clearest opportunity to realize his 2008 campaign pledge to usher in a more productive, bipartisan era in Washington. The president has since pivoted to make a more concerted appeal to the Democratic base, blasting those he calls intransigent Republicans at every opportunity.

But in the Post’s version of events, Obama is portrayed as worrying he would face a backlash from the left if he pulled the trigger. And former Obama chief of staff Bill Daley provided surprising, on-the-record support of the GOP’s insistence that the president deserves blame for losing his nerve...

Read the piece in its entirety here.
Posted by DH at 6:44 AM