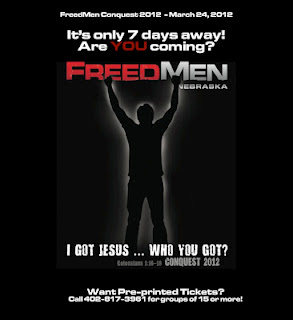 There is a brief but surprisingly positive story that appeared in the Lincoln paper about Ron Brown's remarks at the day-long FreedMen Conquest event last Saturday.

"Brief" in that it gave only a few of his comments (in fact, he had an awful lot to say about an awful lot of issues that day) but "surprisingly positive" in that the quotes Nancy Hicks did pass along to her readers accurately reflected the confidence, courage and joy that Brown is showing even in the face of tremendous attacks by homosexual activists and others of the left.

It will just take a minute to read.

Though I don't usually attend men's rallies, I was at the Conquest myself and was very pleased to see firsthand just how different an event it was. True, the rock-style music offered there didn't suit me but beyond that, the event was quite impressive.

Ron Brown was the primary speaker and he excellently served several purposes. He stirred the audience with strong exhortations. He carefully explained to them the biblical requirements regarding both personal integrity before God and the obligations to be lights of the world in their families, neighborhoods, churches, schools, workplaces and in the public square. He illustrated his points through his own unique preaching, appropriate video clips, and creative enactments from the sporting arena using audience members.

And Ron Brown also brought in a lot of his friends to provide a few comments about these matters and to provide resources from their own ministry experience. The result was a well-paced and well-balanced program that went way beyond the "rah rah quotient" that so many men's rallies seem to shoot for.

Instead, the FreedMen Conquest was designed to enlighten men (and young men) about the critical moral issues that require their prayerful, winsome response. Sexual purity. Being engaged Dads. Enlightened citizenship. Bible study. Fighting specific evils such as Planned Parenthood and the sex trafficking industry. Intercessory prayer. Courage of convictions. Liberty in Christ. The transforming power of the gospel. Upholding the dignity of women, the defenseless, the needy and being willing to serve them with grace and perseverance.  Mutual accountability. Mentoring the next generation.

In fact, more than making the audience aware, the day-long event was designed to alert men to key details of the issues, teach them how to more effectively wage spiritual warfare, and to provide them with examples, role models, and ongoing information resources to make Nebraska's Christian men a more potent force for God's work in our state.

I was honored to have had a small part in this big program. But I was also honored to simply be there and soak in so much good information, encouragement and challenge. I commend FreedMen as a ministry you, your family and your church should really get behind. They are doing a fine work and doing it under a lot of pressure. This rally was just one example of their positive effect.
Posted by DH at 11:13 AM