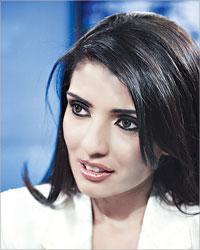 The Authority for the Promotion of Virtue? That's the Orwellian title given the religious police of Saudi Arabia. But, according to journalist Nadin Al-Badir, those virtuous cops are often ex-cons with histories of violence and drug dealing.

But it's worse than that. Al-Badir related to a television audience in Egypt just how barbaric their policies can be -- as in beating a man to death because of his hair length or in forcing more than a dozen young girls to die in a fire because they were not wearing traditional Islamic head coverings.