Barack Obama Is the Anti-Patriot 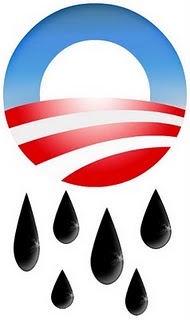 It's a rare thing but the two big Posts (the newspapers of Washington and New York) are bothered today about the same thing; namely, Barack Obama's mind-numbing cancellation of the Keystone pipeline. First the New York Post editorial:

Who knows how many potential jobs President Obama killed yesterday when he bowed to hard-core environmental activists and put an indefinite hold on the mammoth Keystone XL oil pipeline?

Beyond doubt, it was a lot.

At the same time, he planted a big wet one on his greenie base — which he’ll need to hold on to if he’s to win re-election. Obviously, he has his priorities...

That will make the left very happy. But, again, it does nothing for job-creation and — more important over the long term — does even less for energy independence. (Whatever happened to Obama’s promise to find ways to wean the nation off of Middle Eastern oil, anyway?)

Moreover, it’s an open invitation to Canada to instead build the pipeline for another major oil consumer — China.

Ironically, Obama’s announcement came just a day after his own Council on Jobs and Competitiveness called for an “all-in approach” to energy — including expanded oil and gas drilling and expediting new projects...

Mr. Obama’s Jobs Council could start by calling out -- the Obama administration.

On Wednesday, the State Department announced that it recommended rejecting the application of TransCanada Corp. to build the Keystone XL oil pipeline, and Mr. Obama concurred. The project would have transported heavy, oil-like bitumen from Alberta — and, potentially, from unconventional oil deposits in states such as Montana — to U.S. refineries on the Gulf of Mexico coast...

We almost hope this was a political call because, on the substance, there should be no question. Without the pipeline, Canada would still export its bitumen — with long-term trends in the global market, it’s far too valuable to keep in the ground — but it would go to China. And, as a State Department report found, U.S. refineries would still import low-quality crude — just from the Middle East. Stopping the pipeline, then, wouldn’t do anything to reduce global warming, but it would almost certainly require more oil to be transported across oceans in tankers...

But the best analysis of all is from a Washington Post op/ed piece from Robert J. Samuelson. Entitled "Rejecting the Keystone Pipeline is an Act of Insanity," Samuelson's column is spot on in underscoring Obama's base and unprecedented anti-Americanism.

President Obama’s rejection of the Keystone XL pipeline from Canada to the Gulf of Mexico is an act of national insanity. It isn’t often that a president makes a decision that has no redeeming virtues and — beyond the symbolism — won’t even advance the goals of the groups that demanded it. All it tells us is that Obama is so obsessed with his reelection that, through some sort of political calculus, he believes that placating his environmental supporters will improve his chances.

Aside from the political and public relations victory, environmentalists won’t get much. Stopping the pipeline won’t halt the development of tar sands, to which the Canadian government is committed; therefore, there will be little effect on global-warming emissions. Indeed, Obama’s decision might add to them. If Canada builds a pipeline from Alberta to the Pacific for export to Asia, moving all that oil across the ocean by tanker will create extra emissions. There will also be the risk of added spills.

Now consider how Obama’s decision hurts the United States. For starters, it insults and antagonizes a strong ally; getting future Canadian cooperation on other issues will be harder. Next, it threatens a large source of relatively secure oil that, combined with new discoveries in the United States, could reduce (though not eliminate) our dependence on insecure foreign oil...

The big winners are the Chinese. They must be celebrating their good fortune and wondering how the crazy Americans could repudiate such a huge supply of nearby energy...

By law, Obama’s decision was supposed to reflect “the national interest.” His standard was his political interest. The State Department had spent three years evaluating Keystone and appeared ready to approve the project by year-end 2011. Then the administration, citing opposition to the pipeline’s route in Nebraska, reversed course and postponed a decision to 2013 — after the election.

Now, reacting to a congressional deadline to decide, Obama rejected the proposal. But he also suggested that a new application with a modified Nebraska route — already being negotiated — might be approved, after the election. So the sop tossed to the environmentalists could be temporary. The cynicism is breathtaking.
Posted by DH at 10:56 AM