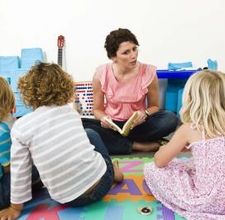 At a recent gathering of seminary students who were engaged in ministry internships, one of the students began talking about her work as a children's minister. She was enjoying the experience, and the children all seemed to be enjoying their time with her on Sundays, but she expressed her concern that the curriculum she was using was not theological enough. "I don't want them just to hear Bible stories all the time," she said. "I want them to learn theology."

At first, it seems like a fair statement. I certainly commend her desire to provide solid teaching, and the church is definitely in need of a more rigorous education for its members. Everyone from the History Channel to Peter Singer to the local Mormon missionary is attacking Christian faith and doctrine. If the church is to withstand these attacks, then we certainly need to be educating our children about what we believe and why we believe it.

I find it troubling, however, that evangelical ministers who claim the authority and inspiration of Scripture would reject the notion that children's Bible stories can provide this education.

I realize that VeggieTales' Dave and the Giant Pickle may not be quite on par with the writings of Carl Henry, but does that mean that the story of David and Goliath is substandard as well? The vast majority of the Old Testament is narrative; in the New Testament, the four Gospels and Acts are also in story rather than propositional form. Jesus Himself primarily taught through telling stories! Biblical narrative is much more than mere entertainment, biography, or history. While they may not always conclude with an explicit moral (as do Aesop's fables), they are deeply theological...

Read the rest of Rebecca Poe Hays's very interesting column over at BreakPoint. Good stuff.
Posted by DH at 9:47 AM