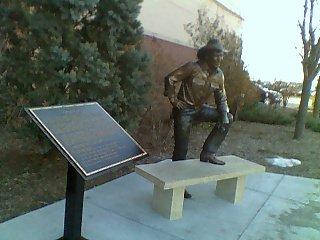 Claire and I had to (shudder) go Christmas shopping yesterday. We were looking for a particular sports-oriented gift and so we decided on Scheels, the place that has been so efficient and reasonably priced when I need my bike tuned up. As we approached the south entrance, we decided we had found yet another reason to like the store for erected there were life-sized statues of four great American Presidents: George Washington, Thomas Jefferson, Abraham Lincoln and...Ronald Reagan!

Claire took a couple of photos and then called the store to complement them. She talked to Michelle at the store here in Omaha who told her the statues have been up since summer. Their plan is to erect the statues at all the Scheels stores but since the Omaha store is one of the biggest, they got the first ones. It seems that the president of Scheels feels very strongly about wanting to honor these heroic American leaders in this way. 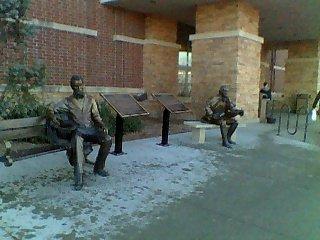 Then give Scheels a call or write them a quick note and tell them so. And drop by and have your picture taken with four of America's greatest heroes.