Saudi Arabia Is Teaching Their High Schoolers What! 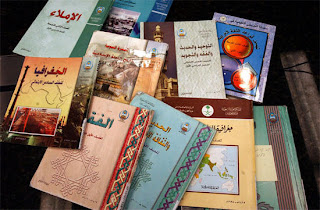 From our "friend and close ally" Saudi Arabia comes a textbook for high school kids that show how to cut off a thief's hand and foot. Homosexuals are to be killed and women treated as the weak and irresponsible 3rd class creatures they are. And then there's the textbook for 9th graders explaining how imperative it is that Jews be annihilated. “The hour (of judgment) will not come until the Muslims fight the Jews and kill them...There is a Jew behind me come and kill him.”

These textbooks are not old stuff either. They are quite recent publications which clearly represent a broken promise by the Saudi government that they would rid textbooks of jihadist language.

“This is where terrorism starts, in the education system.” Ali Al-Ahmed, director of the Institute for Gulf Affairs, told Fox News. Al-Ahmed, a Saudi national, said the textbooks, made and paid for by the Saudi government, were smuggled out of the kingdom through confidential sources...Al-Ahmed say the textbooks are both a Saudi and an American problem. “If you teach 6 million children in these important years of their lives, if you install that in their brain, no wonder we have so many Saudi suicide bombers.”

The books were obtained by the Institute for Gulf Affairs in Washington, D.C. and translations of their content were provided to Fox News.

In Atlanta earlier this month, the Saudi minister responsible for the textbooks talked about the importance of education for woman. Asked by Fox News about the textbooks, Prince Faisal Bin Abdullah Al-Saud said, “I always say to people, please come. Come, try to see us. But come without a preconceived idea. ... Especially when you want to raise the future, no one is going to introduce violence. Violence is absolutely against - I think this is, I don't know who put in those ideas.”

When Fox News offered to show the quotes to the minister, he said, “there are many quotes” and walked away.

Fox News also asked the Saudi Embassy in Washington D.C., for comment on the textbooks and the translations, but there was no immediate response.
Posted by DH at 11:01 AM