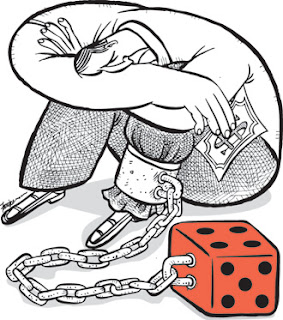 The latest gift of the Barack Obama administration to the forces of economic failure and social degradation? Without judge, jury or democratic vote to hinder the, Erich Holder's (choke) Justice Department has just decriminalized much of online gambling.

It ends up to be quite a Christmas gift to the scalawags who run what is laughingly called the gambling industry.

The Obama administration cleared the way for states to legalize Internet poker and certain other online betting in a switch that may help them reap billions in tax revenue and spur web-based gambling.

A Justice Department opinion dated September and made public on Friday reversed decades of previous policy that included civil and criminal charges against operators of some of the most popular online poker sites.

Until now, the department held that online gambling in all forms was illegal under the Wire Act of 1961, which bars wagers via telecommunications that cross state lines or international borders.

The new interpretation, by the department's Office of Legal Counsel, said the Wire Act applies only to bets on a "sporting event or contest," not to a state's use of the Internet to sell lottery tickets to adults within its borders or abroad.

"The United States Department of Justice has given the online gaming community a big, big present," said I. Nelson Rose, a gaming law expert at Whittier Law School who consults for governments and the industry.

The question at issue was whether proposals by Illinois and New York to use the Internet and out-of-state transaction processors to sell lottery tickets to in-state adults violated the Wire Act.

But the department's conclusion would eliminate "almost every federal anti-gambling law that could apply to gaming that is legal under state laws," Rose wrote...