Does Ron Paul Sit On a One-Legged Stool? 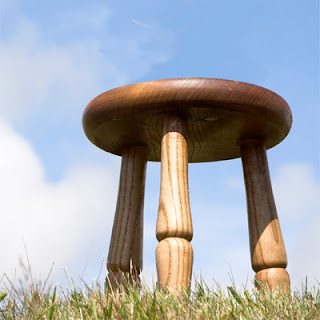 I have several friends and pro-life colleagues (most of them young) who are extremely keen on Ron Paul. They see in Congressman Paul a principled Constitutionalist and all-round nice guy. But the majority of my friends think of Ron Paul the way that Matt Barber, writer and vice president of Liberty Counsel Action, does.

Don’t get me wrong. I personally like Mr. Paul. He’s that affable - if not a little “zany” - uncle who has the whole family on edge at Thanksgiving. “Oh boy; what’s Uncle Ronny gonna say next?”

Still, you wouldn’t give Uncle Ronny the carving knife for the turkey, much less the keys to the Oval Office.

Mr. Paul is many things, but conservative is not one of them. He’s a died-in-the-wool libertarian. That’s one part conservative, two parts anarchist.

Ronald Reagan often spoke of a “three-legged stool” that undergirds true conservatism. The legs are represented by strong free-market economic principles, a strong national defense and strong social values. For the stool to remain upright, it must be supported by all three legs. If you snap off even one leg, the stool collapses under its own weight.

Mr. Paul is relatively conservative from an economic standpoint, but in true libertarian form, has snapped off the legs of national defense and social values...

My Ron Paul friends will dismiss Barber's criticism as simplistic, even a bit sneering. I'll give them that. However, most conservatives will feel that Barber's punches to Paul's isolationist and libertarian positions are above the belt. And I suspect they'll believe those punches land awfully hard.

With most conservatives fully persuaded of the wisdom of Ronald Reagan's three-legged stool philosophy (even allowing for a possible upset win in Iowa), Ron Paul simply will not win the nomination. Even some of those Ron Paul friends of mine admit (in private) that he can never win. Yet, moved by conscience and philosophic idealism, they continue to give money, knock on doors, work the phones, and otherwise campaign for the guy they love and trust.

But me? I can't help but wonder what better chances genuine conservatives like Michelle Bachmann or Rick Santorum would have had if those Christian supporters of Ron Paul had recognized political realities and swung support their way.

But because they wouldn't make that move, I'm deeply afraid the Republicans will end up sending Mitt Romney against Barack Obama. And that, even if Romney can manage a win, will in no way be what's best for our nation, the Church or the world.
Posted by DH at 11:17 AM