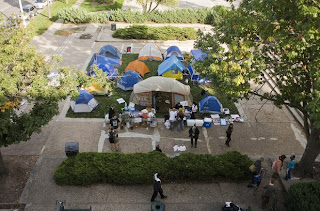 Who cares that the lingering presence of the Occupy Wall Street/Occupy Main Street protesters demonstrates 1) an incoherent message, 2) a public nuisance, and 3) a spirit of defiant lawlessness? And who cares that acquiescence to their anti-social shenanigans demonstrates an outrageous double standard?

Not police, city officials or the mainstream media.

It's an incredible display of cowardice, hypocrisy and injustice.

Julie Schmit-Albin, Director of Nebraska Right to Life, sees through the pettifogging inaction of the powers that be towards the OWS exhibition in Lincoln, Nebraska. Said Julie at a recent City Council meeting, "I dare say if a group of pro-lifers last January just decided to pitch tents on Centennial Mall that would not have lasted very long."

Indeed. We all know how that would end.

Back in October, the blog Grassroots in Nebraska investigated the gross negligence of police and city officials regarding their refusal to enforce the laws being broken by the Occupy Lincoln move-in. The result was this very detailed (and doggone alarming) report.

Though the OWS protests have generally been of a sophomoric character thus far, they nevertheless show that the forces of anarchy have been unleashed -- and with nary a whimper from city councils, news editors or the cops on the beat.

It may not be goodnight in America just yet. But you can sure see it from here.
Posted by DH at 8:33 AM