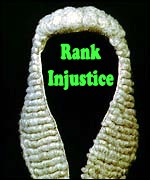 When government tries to do everything, they end up doing a lousy job of the most basic things.

Adams County (Colorado) police arrested and held in jail a deaf man for 25 days without ever giving him the right to a sign language interpreter. The fellow had no idea what had happened to him. His rights were never explained. He didn't know what was going to happen to him. He was given no legal representation. Good grief, he had no one to communicate with about anything!

And, oh yes; he was being held on a charge that was eventually dropped.