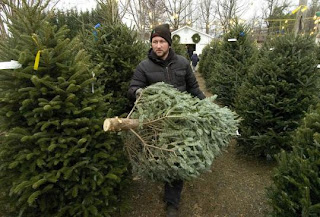 One just can't believe that anyone -- even the numbskulls in this out-of-touch, greedy, Nanny State administration -- could come up with this kind of stupidity. But they do. Over and over.

Here's more from David Addington at the Heritage Foundation's Foundry.

The economy is barely growing and nine percent of the American people have no jobs.  Is a new tax on Christmas trees the best President Obama can do? And, by the way, the American Christmas tree has a great image that doesn’t need any help from the government.
Posted by DH at 4:20 AM