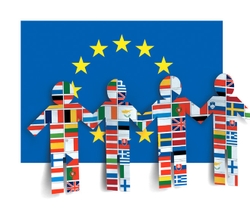 Here's your morning wake up call from the European Union. Yes, that same European Union that Barack Obama so admires and wants to make a model for the United States.

"Without stronger governance, it will be difficult if not impossible to sustain the common currency," EU Commission chief Jose Manuel Barroso said of his latest legislative proposals. The head of the executive EU arm, Barroso presented radical plans that would allow him and Economy Commissioner Olli Rehn to decide to intervene in national policymaking...

Barroso argued that to complement democracy at the level of national parliaments, for instance in the setting of annual budgets, a "democracy of the EU" also had to be given its say...
Posted by DH at 11:08 AM