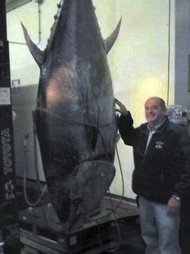 Yes, here's yet another example of the Nanny State using persnickety, peripheral and pettifogging rules to interfere in its citizens' lives. Here's the details from Yahoo News.

A Massachusetts fisherman pulled in an 881-pound tuna this week only to have the federal authorities take it away. It sounds like a libertarian twist on the classic novella by Ernest Hemingway, The Old Man and the Sea, but for Carlos Rafael, the saga is completely true.

Rafael and his crew were using nets to catch bottom-dwellers when they inadvertently snagged the giant tuna. However, federal fishery enforcement agents took control of the behemoth when the boat returned to port. The reason for the seizure was procedural: While Rafael had the appropriate permits, fishermen are only allowed to catch tuna with a rod and reel...

And while Rafael is denied the mother of all fish stories, the federal impoundment of his catch also means he's probably losing out on a giant payday. A 754-pound tuna recently sold for nearly $396,000...

"They said it had to be caught with rod and reel," a frustrated Rafael said. "We didn't try to hide anything. We did everything by the book. Nobody ever told me we couldn't catch it with a net."

Rafael says he has meticulously prepared for a giant catch like this, purchasing 15 tuna permits over the past four years for his groundfish boats. He even immediately called a "bluefin tuna hot line" (yes, such things exist) to report his catch. "I wanted to sell the fish while it was fresh instead of letting it age on the boat," he said. "It was a beautiful fish."
Posted by DH at 11:02 AM