Did I hear you say you had never bought one of Barack Obama's books, one of those ghostwritten, narcissistic biographies that hailed the young community organizer before he had done anything noteworthy at all? 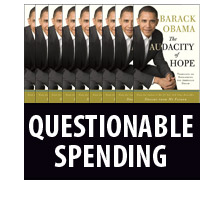 Well, you're wrong. For it turns out that your taxes have purchased at least $70,000 worth of Obama's two books (Dreams from My Father and The Audacity of Hope) to serve as government Christmas gifts and to furnish "key libraries" in embassies around the world.

Of course, the President hasn't thanked you for helping bump up his personal fortune. Indeed, the administration is being ticklishly evasive on the whole matter. But I figured you'd want to know that even though your personal finances may be reeling, you're nevertheless doing your part in helping provide for plenty of wasteful, foolish government spending that enriches others.

Including Barack Obama who has raked in millions already from "his" books.

Merry Christmas.
Posted by DH at 9:18 AM