Another Democrat To Retire, Delivers Parting Shot at Obama 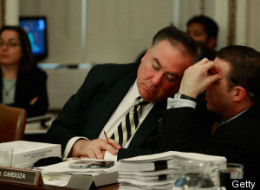 It wasn't a huge surprise that California Democrat Dennis Cardoza announced that his fifth term in Congress will be his last. After all, he's the sixth current Congressman to announce plans for retirement. And yes, they're all Democrats.

But what was surprising -- and, to the White House, very embarrassing -- is just how Cardoza bowed out; namely by delivering a severe shot at Barack Obama's incompetency.

“After nearly 20 years in elected office, I offer this advice: Voters need to reward statesmanship.   Too many Americans are losing faith in our government and our democracy.  For our country to change course, voters must aggressively punish extreme partisanship and rhetoric when they cast their ballots.   The United States of America is too great a nation for us not to demand excellence in our leaders.”
Posted by DH at 8:46 AM