What If It's Perry vs Obama? 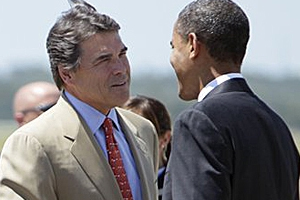 Conservative activist/writer John Hawkins is well aware that the G.O.P. contest is far from over and that every person in the running (including Texas Governor Rick Perry) has flaws that need to be carefully considered. Nevertheless, with the Perry momentum beginning to build, it is important to review just what a contest between Rick Perry and our current President would look like.

Hawkins does just that in this insightful Townhall column, "6 Reasons For Conservatives to Support Rick Perry in 2012." Check it out.
Posted by DH at 11:29 AM