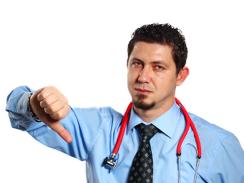 The latest edition of the Journal of Obstetrics & Gynecology contains an article which is most relevant to the abortion industry's push in recent years towards chemical abortion, forced abortion training in medical schools and permission for people other than trained physicians to do abortion operations.

The reason? Well, in the last 15 years, science, technology and various successes of the pro-life movement have combined to greatly increase society's awareness of the humanity of the preborn. Therefore, abortion is increasingly understood as an unnecessary, cruel and mercenary action.

And that means fewer people want to be abortionists.

Here, direct from the abstract of the journal article, are the findings of the study.

We conducted a national probability sample mail survey of 1,800 practicing ob-gyns. Key variables included whether respondents ever encountered patients seeking abortions in their practice and whether they provided abortion services. Correlates of providing abortion included physician demographic characteristics, religious affiliation, religiosity, and the religious affiliation of the facility in which a physician primarily practices.

RESULTS: Among practicing ob-gyns, 97% encountered patients seeking abortions, whereas 14% performed them. Female physicians were more likely to provide abortions than were male (18.6% compared with 10.6%, adjusted odds ratio 2.54, 95% confidence interval 1.57–4.08), as were those in the youngest age group, those in the Northeast or West, those in highly urban postal codes, and those who identify as being Jewish. Catholics, Evangelical Protestants, non-Evangelical Protestants, and physicians with high religious motivation were less likely to provide abortions.

CONCLUSION: The proportion of U.S. ob-gyns who provide abortions may be lower than estimated in previous research. Access to abortion remains limited by the willingness of physicians to provide abortion services, particularly in rural communities and in the South and Midwest.