Where Is That Tolerant, Democratic, Moderate Islam? 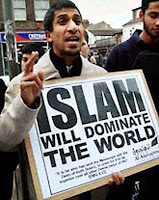 Time and again we are told not to judge Islam by the Islamists—that is, those who blow up our towers and then dance in the streets, who shoot our servicemen and women, who punish and execute Christians and other religious minorities in their midst, who decapitate journalists, who strap explosive devices to their children in order to murder Jews. No, we are told to look to the Muslim moderates to set things right—those who represent the true face of Islam.

...Given the apparent global pattern of Muslim aggression against Christians, it is fair—even necessary—to ask why Islam itself so often seems to be an aggravating factor rather than a calming one.

You might argue that Christianity has its own sorry history of religiously motivated violence, and you would be right. The Crusades were a wretched, noisome stain on the reputation of the church—and, by extension, on the character of Christ. Yet the last time I checked, the entire Christian church has repented of the Crusades as a horrible departure from the gospel preached by Jesus.

No such repentance, however, has been forthcoming from the followers of Islam, who, after all, also participated in the Crusades. Some of them, in fact, are carrying out a new crusade against Christians, Jews, and anyone else who would stand between them and their dream of a worldwide Muslim caliphate -- with little dissent heard from Muslim moderates...

Stan Guthrie's essay over at Breakpoint represents solid thinking. Check out the whole piece here.
Posted by DH at 9:25 AM