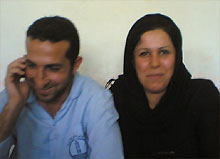 Voice of the Martyrs reports that the death sentence of Youcef Nardarkhani, an Iranian pastor convicted of apostasy, has been upheld and confirmed by the Iranian Supreme Court. Pastor Youcef, a leader in the Full Gospel "Church of Iran" network, was arrested and imprisoned in October 2009 after protesting a decision by the government requiring that his son study the Qur'an (click here for more). In September, Iran's 11th Circuit Criminal Court of Appeals for the Gilan Province upheld Pastor Youcef's death sentence and conviction for apostasy. The delivery of the death sentence, however, was delayed. Many believe the delay was a means to pressure him to him to turn away from Christ in prison.

With the sentence now upheld and confirmed, it is possible that the authorities will ask him to recant his faith and execute him without advance notice if he refuses -- a typical pattern of action taken by authorities in such cases. If Pastor Youcef is indeed executed, his would be the first judicial execution of a Christian in Iran in two decades. He is but one of several members of his church who have been arrested by Iranian officials, and his wife has also spent time in prison because of her faith in Christ.

Pray that God will continue to equip Pastor Youcef to stand firm in his faith. Pray that he will sense the love and support of all those praying for him and working on his behalf. Pray that the Iranian authorities involved will be convicted of their injustice and overturn the case. Pray for comfort to abound in the hearts and minds of Pastor Youcef's wife and children.

The Family Research Council adds to this story two ways that you can respond in addition to prayers. You can express your concern for Pastor Nadarkhani and ask for his release by calling the Iranian Interest Section at the Embassy of Pakistan in Washington, DC at (202) 965-4990.  You can also contact the Permanent Mission of the Islamic Republic of Iran at the United Nations: Email – iran@un.int; Phone – (212) 687-2020.

While contending that the true face of Islam in Iran is consistent with peace, tolerance and justice, there continues a pattern of brutal persecution against those of other religious views. A clear example is the treatment of Christian pastor Youcef Nardarkhani who is in prison and under a death sentence simply for the peaceful practice of his faith. And the zealous, unfair persecution which has been targeted at him is directed at many others also. Please stop this cruel intolerance and outright persecution immediately. Demonstrate to the world that Iran can act with honor and justice.

I also followed this up with an e-mail to the U.S. State Department, copies of which I sent over to my Congressman and Senators.

We've learned this week of how proud Hillary Clinton was that the U.S. State Department arranged for Lady Gaga to perform at a homosexual rights parade in Rome. May I ask that a bit less attention be paid to such frippery and more paid to such truly momentous affairs like the violent persecution of Christians throughout the world? In particular, I draw your attention to the desperate plight of Youcef Nardarkhani, an Iranian pastor convicted of apostasy who has been given a death sentence because of his peaceful practice of Christian belief. As you are well aware, he is one of so very many innocent persons undergoing such persecution.

So how about less Lady Gaga irrelevancies and more work on the critical issues -- indeed, life and death issues -- of human rights.

By the way, if you do not want to go through the hassle of creating an account in order to e-mail the State Department (obnoxious requirement, that), please write a letter using this address:
U.S. Department of State
2201 C Street NW
Washington, DC 20520
Posted by DH at 10:17 AM