When Is YOUR Lt. Dan Band Party? 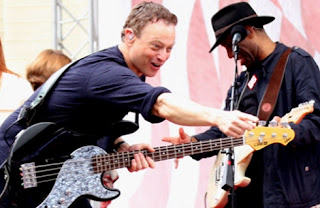 It's a busy day here for Claire and I -- blogging, phone calls, computer correspondence with a friend in Eastern Europe, a presentation of "When Swing was King" at a new nursing home, mowing the lawn and a few other items -- but we're conducting all of our activities in the afterglow of last night's Lt. Dan Party. What a pleasant time we had together and what a compelling movie  "Lt. Dan Band: For The Common Good" turned out to be. Truly extraordinary.

I mentioned our plans for this party last week and even invited you along. But since you didn't make it (bummer!), I now urge you to host a party of your own in which family and friends gather to watch together the award-winning streaming video, "Lt. Dan Band: For The Common Good." Claire rigged up her laptop to the TV so that everyone in the living room had a great seat. And we all enjoyed it immensely. A description of the film is contained in the above link but I can now testify personally to it's motivational impact. It really is a terrific piece of work: inspiring, informative, entertaining and patriotic in the best sense.

But don't just take my word for it.

Filmmaker Jerry Bruckheimer says of the movie, "A wonderful and inspiring chronicle of Gary and his fellow musicians as they journey across America and the world. But the real point of the film, as it should be, is to shine a much-needed light on those in uniform, whose tremendous sacrifices can never - and must never - be taken for granted." And his fellow filmmaker Ron Howard agrees, "A powerful and compelling tribute that continues to resonate long after the movie has ended. It is also that rare film that entertains even as it inspires. It's a clear reminder of my friend, Gary Sinise's talent and character. He's one of our 'good guys.'"

Basketball legend Pat Riley says of the film, "What a compelling piece of work… very moving! A must see for all Americans…It leaves one feeling inadequate and certainly wanting to do more."  While the President of the USO chimes in, "Jonathan Flora has delivered a moving portrayal of service and sacrifice! Connects in powerful ways with troops, first responders, and their families!"

And Major General John F. Campbell, the Commanding General of 101st Airborne Division? He simply says, "Gary Sinise is the Bob Hope of our generation!"

"Lt. Dan Band: For The Common Good" is available as a pay-per-view experience for only $3.99. But a dollar of that goes to The Gary Sinise Foundation which honors our nation's defenders through programs and projects that serve our military, veterans, first responders and their families, as well as by supporting other charities such as the USO, Operation International Children and Snowball Express.

So do a good thing for the Gary Sinese Foundation as you do a very good thing for you, your family and your friends by throwing a Lt. Dan Band party of your own. Soon!
Posted by DH at 12:36 PM