Bureaucrats Are Stealing Your Freedom (One Rascally Regulation After Another) 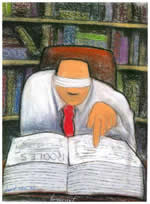 Imagine a hypothetical country where small groups of unelected individuals can make law by simply sitting around a conference table deciding they want a new law, even if that law violates the constitution.  Those unelected representatives could only be dismissed by the executive power and could essentially do whatever they wanted.  Furthermore, imagine if the citizens of that country were not allowed to contest these decisions in court because they didn't have "standing" to do so.

Furthermore, imagine at least one of these agencies would be empowered to go seize the property and businesses of the citizenry without any possibility of outside judicial review.  In our hypothetical country, it wouldn't matter if there were an elected body, because the agencies and executives could do pretty much anything they wanted while letting the people have the illusion of electoral control.

The country I am speaking of country isn't Cuba, Russia, or China.  Startlingly, the country I am speaking of is the United States of America, bit by bit, and the resulting soft dictatorship is getting worse.  The founders of the USA knew that government would always be the enemy of freedom.  They knew that if it became easy to pass laws then the freedoms of the Constitution would be completely undermined by an avalanche of restrictive laws.  To avoid this fate, they installed checks and balances in the Constitution to make it difficult to pass law as those laws.  They would be truly dismayed by the situation we have now some 250 years later.

Currently there are literally hundreds of government agencies that have the power to "regulate" almost any aspect of our lives, from the food we ingest to the way we educate our children.  Those agencies have created nearly 200,000 pages of regulations that have the power to deprive the citizens of property and liberty.  Yet these regulations are not called law because laws, of course, have to be passed by Congress.  Regulations are agreed upon by a small group of regulators that are out of the reach of the election process.  All of this happens despite the fact that there is no constitutional basis for Congress being able to delegate the authority to make laws to a third party and the founders probably never conceived they would try to do such a thing.  However these agencies have been passing "regulations" in direct violation of the Constitution for decades...

Read the rest of "The Soft Dictatorship" by Robert Eugene Simmons Jr. over at American Thinker.
Posted by DH at 11:09 AM