About That Campus Crusade for Christ Name Change 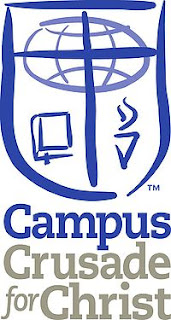 One becomes so used to the broad streaks of compromise, cowardice and heterodoxy spreading throughout American evangelicalism that the announcement that Campus Crusade for Christ was changing its name created no small amount of concern among conservatives. That concern was heightened even more when the new name was announced. Campus Crusade for Christ will, from the beginning of 2012, become known merely as...wait for it...Cru.

After two years of prayer, conversation and massive surveys taken among both Christians and non-Christians, this is what they came up with?

Campus Crusade for Christ leaders explain that the word "Crusade" carries a lot of negative baggage and thus creates unnecessary hassles in their attempts to spread the gospel. And the word "Campus" was dropped because the organization has, for many decades now, been involved in international outreach that goes way beyond the university.

I can understand those concerns. And I can even agree that a name change, such as those the organization has already made for some of its overseas ministries, would be helpful.

Sure, staff members and even some supporters have used that nickname since the ministry began. Insiders are thus comfortable with Cru and even have a fond attachment to the nickname. But outside of those few, Cru will be either too cryptic (like the logos of so many modern corporations -- "What the heck is that supposed to be, Martha?" -- or it will retain the very associations that the organization wants to escape -- "Hey, isn't Cru just an abbreviation for that militant, intolerant and oh so politically-incorrect word, Crusade? Who are you guys trying to fool?"

And then there's the greatest concern of all. Why drop "Christ" altogether?

Campus Crusade for Christ (Cru) is unswervingly committed to proclaiming the name of Jesus Christ. We are committed to the centrality of the cross, the truth of the Word, the power of the Holy Spirit and the global scope of the Great Commission. We care more about effectively proclaiming the love and forgiveness of Jesus Christ than we do about having the word “Christ” in our name.

Although the words Campus and Crusade served as hindrances, there was never any intentional decision to remove the word “Christ.” Yet as we considered hundreds of name possibilities, our experience confirmed that Cru would provide greater opportunity to connect men and women with the heart of Jesus, and to help them consider the good news of the gospel.

As an organization, we exist for the sole purpose of helping individuals experience the transforming grace and forgiveness of the gospel through Jesus Christ.

I am very glad to hear this. And even though I remain unconvinced that a name change was necessary, let alone a name change to "Cru," I can let things stand. Indeed, I have decided to continue to support the ministry in prayer, in public pronouncements, and even in financial donations. As I wrote this weekend to a friend who raised the issue, "If time demonstrates that something else is going on (i.e. genuine compromise or cowardice) then I certainly won't be shy about taking them on. But from what my Cru friends assure me, that's not happening. Good."

On this website, Campus Crusade for Christ leaders (including co-founder, Vonette Bright) give their side of the name change story. And there is a lot more there for you to consider. I urge all of you who are interested in this matter to give them a fair hearing.