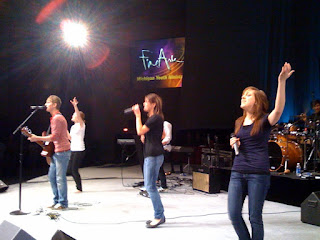 On a recent Sunday, I found myself visiting a Protestant megachurch. Entering the "worship center" was eerily similar to being ushered down the aisle of a movie theater: floor lighting, padded chairs, visual effects shown on two large screens, and music over the speaker system.

A band appeared on stage to begin the service with live music. It was dark, and I thought I heard the audience singing along, but it was impossible to tell. And although I was seated in the front row, I sensed that the congregation was almost superfluous to the activity on stage. As in most forms of entertainment, the audience functioned as passive onlookers, participating only in an unseen, intensely personal way.

While the band played, song lyrics flashed across the two big screens, with words like great, God, and high figuring prominently. The musical performance was outstanding, even if the vocabulary was extremely limited. If the songs aimed at an emotional response, they were probably successful, but like so much contemporary worship music, they lacked any element of substantive teaching.

Immediately after the singing, without any announcement, much less Paul's words of institution (1 Cor. 11:23-26), the elements of the Lord's Supper were hurriedly handed around. Again, I was amazed at the blandly efficient nature of this activity. We could have been passing pretzels and soda pop. No one offered any guidance whatsoever on the sharing of this critical ordinance or sacrament. It seemed a strictly vertical encounter between each individual and God.

Next came the sermon, offered by a capable person who worked very hard to relate while teaching some biblical content. A simple outline appeared on the screen so that we could follow the train of thought. So did the relevant Bible passages, lest anyone could not find them in an actual Bible. I noticed that the illustrations came almost solely from popular movies and television. Then the service ended as abruptly as it began, with a few announcements over the speakers and a cordial "thank you" to the congregation. No benediction or closing prayer—not even a person to give it. The house lights came on, and it was time to leave...


Can you identify with D. H. Williams' description? Are you bothered about it -- either because you believe modern church services have lost integral elements or because you suspect that Williams is going to completely reject a style of doing church that you enjoy? In either case, I encourage you to read the rest of his article, "Contemporary Music: The Cultural Medium and the Christian Message." You'll find it at the Christianity Today web site right here.

I'd like to suggest that this article could serve as a great connecting point for a luncheon/breakfast/coffee discussion. So, how about it? Any of my friends who are in their 20s or 30s want to get together and kick this stuff around? Print off the article and read it through. Then give me a call or send me an e-mail. I'll be looking forward to it.
Posted by DH at 10:16 AM