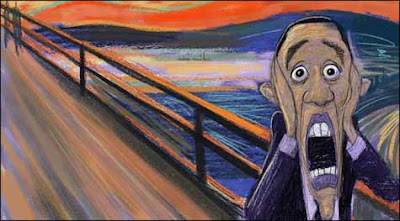 Has Obama ever given a bravura performance at a press conference? No wonder he goes three months or so without doing them.

Today he mentioned a tax break for corporate jets six times. He didn’t mention that he signed legislation preserving the tax code provision into law, or that the grand total of the savings of ending that tax break would be about $3 billion over ten years.

The man who flies anywhere he wants, anytime, cost-free, complained at great length that other people’s private jets are insufficiently taxed. Tomorrow, Obama will fly on Air Force One to Philadelphia, Pa., to attend two DNC fundraisers, where he will probably again denounce the current tax rates on corporate jets, without anyone remarking on the irony.

What I think this reveals is that Barack Obama is not used to being challenged...

So even ten questions from the White House press corps can take Obama off his game. Among the highlights of today:

Asked about whether the War Powers Act was constitutional, he responded, “I’m not going to put my constitutional law professor hat on here.” Er, wait, wasn’t that a reason folks were supposed to vote for you?

Asked whether marriage was a civil right – a yes or no question that obviously put him on the spot about gay marriage – he began talking about separate issues, like hospital visitations.

Occasionally Obama’s gaffes would seem strangely honest, like when he said, “I’ll keep on giving you the same answer until I give you a different one,” on gay marriage, or “I don’t even have to get to the Constitutional question,” rather bluntly acknowledging he was ignoring Chuck Todd’s actual question on the War Powers Act.

The President constantly infuriated by the perception that he hates the private sector responded to a question, “The business community always complains about regulations.” Unlike unions, trial lawyers, public sector employees, apparently.

Asked about the ATF “Fast and Furious” operation, Obama said that Attorney General Eric Holder made very clear that he would have opposed the operation… you know, the one that occurred on his watch.

Discussing the DREAM Act, Obama said, “Kids who grow up here and think of themselves as Americans… let’s make sure those kids can stay.” There’s no dispute that many of these children and teens often have heartbreaking stories, and no real emotional or physical connection to their country of legal citizenship. But thinking of yourself as an American is not the same as being an American. Citizenship is not a state of mind.

“It’s time to stop playing games,” he concluded, and then ended the press conference for the next event on his schedule: welcoming the WNBA Champion Seattle Storm to the White House Rose Garden.

Obama survives difficult questions by avoiding them and waiting for the world to move on. His Republican opponents must challenge him, early and often, and consistently.
Posted by DH at 11:32 AM