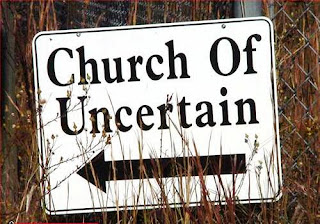 I've mentioned here before that one of the best things to have come from my signing up for Facebook was getting to know Jack Niewold. Jack is an experienced, well-informed and reflective Christian who takes the doctrines of the Faith very seriously. And in the safe, self-centered, soft-headed religious atmosphere that dominates American religious life nowadays, he thus provides a much-needed breath of fresh air. I heartily recommend Jack's memoir, Frail Web of Intention, even as I recommend those of you on Facebook to send him a friend request. Tell him I sent you over.

You may not always agree with his conclusions. (He can take that.) But you will always encounter a Christian who thinks carefully, is well-read, is quite kind hearted and patient, and who possesses the joy and confidence that comes from decades of walking with Christ.

And he writes very, very well.

I print below one of Jack's recent essays. I print it in its entirety in so that those of you who are not linked in to Facebook can reap its benefits.

A posting I recently did concerning tattoos and Christians drew lots of fire, and quite a bit of ire, as you might imagine. But there’s a much bigger issue here, one which the question of tattoos clearly begins to reveal.

The fact is, the faith system of great swaths of younger people today, and not a few older people, represents what Bret McCracken calls “ hipster Christianity.” This was quantified a few years ago by David Kinnaman and Gabe Lyons in their groundbreaking study of American Christians called UnChristian. “Out of ninety-five million Americans aged nineteen to forty-one,” Kinnaman and Lyons write, “about sixty million say they have already made a commitment to Jesus that is still important; however, only about three million of them have a biblical worldview.” The authors’ definition of worldview is based on eight criteria, a mix of seminal doctrines and practices, as well as a  commitment to an objective moral code.

When only five percent of those who profess to be Christians respond that their beliefs affect them both cognitively and practically, we have a problem.

The fact is, much that we call Christianity today is neo-gnosticism. It is a minimal set of general, internalized religious propositions that have little affect on matters of language, habit, dress, social expression, sexual standards, and public witness. For millions of evangelical church-goers, “faith” amounts to—in the formula of sociologist Christian Smith—“moral, therapeutic deism,” a kind of feel-good, do-your-own-thing, subjective spirituality.

Thus, in the study done by Kinnaman and Lyons, vast numbers of these young believers have little disagreement with cohabitation, pre-marital sex, abortion, public profanity, habitual movie attendance, and generalized adherence to the political and moral values of the culture at large.

As in every age, when someone attempts to discuss this problem, or to suggest any kind of threshold Christian identity, he or she is understood to be fundamentalist, as placing barriers in the way of those who would otherwise come into the faith, or as judgmental. The very idea of such a discussion is preemptively ruled out of bounds because it offends the sensitivities of those who, in agreement with secular notions of “tolerance,” hold to a conviction that each person is autonomous and possesses a veto over theological or moral considerations that he or she finds personally distasteful.

Is there a problem here? You bet. We seem to be rapidly approaching a point at which the soft tyranny of secular intolerance of public religious expression is combining with a self-censure on the part of the church over what it will agree to as a minimal deposit of the faith and its moral component. We are being driven from the marketplace not only on the basis is external opposition, but by our own misguided belief that Christian faith is primarily a private matter between “me and Thee.”

Rolling this all back is a work of years of struggle on the part of thousands of leaders, most of whom are smarter than I. But the struggle has to begin, if the church is to reclaim its role in society and its authority in the lives of believers. I simply picked a soft spot in the left flank of popular culture—tattoos—to see what a pinprick would reveal.
Posted by DH at 11:33 AM