The Other Teddy Roosevelt 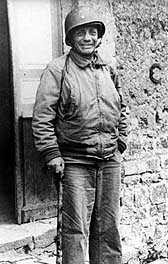 George S. Patton was once asked who was the bravest soldier he ever knew. His answer? Ted Roosevelt, Jr. The sentiment was echoed by Omar Bradley who maintained the essence of heroism could be said in just four words: "Ted Roosevelt, Utah Beach."

The eldest son of one of the most remarkable men in American history, Ted himself was a man of astounding character and achievement, whether it was as a statesman, a soldier or a loving husband and father.

Among the many momentous achievements of his life, Teddy Jr. was awarded the Medal of Honor for his actions on D-Day. Here is the text of that citation, awarded posthumously because Roosevelt died 6 days after the Allied invasion began.

For gallantry and intrepidity at the risk of his life above and beyond the call of duty on 6 June 1944, in France. After 2 verbal requests to accompany the leading assault elements in the Normandy invasion had been denied, Brig. Gen. Roosevelt's written request for this mission was approved and he landed with the first wave of the forces assaulting the enemy-held beaches.

He repeatedly led groups from the beach, over the seawall and established them inland. His valor, courage, and presence in the very front of the attack and his complete unconcern at being under heavy fire inspired the troops to heights of enthusiasm and self-sacrifice. Although the enemy had the beach under constant direct fire, Brig. Gen. Roosevelt moved from one locality to another, rallying men around him, directed and personally led them against the enemy.

Under his seasoned, precise, calm, and unfaltering leadership, assault troops reduced beach strong points and rapidly moved inland with minimum casualties. He thus contributed substantially to the successful establishment of the beachhead in France.

For a splendid biography on Ted Roosevelt, one that also includes great material on Ted's parents, siblings and his own family, check out Theodore Roosevelt, Jr.: The Life of a War Hero by H. Paul Jeffers. It's published by Presido Press, Inc.
Posted by DH at 10:27 AM