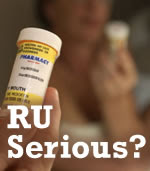 You read the appeal from former Nebraska Governor Kay Orr (immediately above) informing you of the need for Nebraska citizens to get behind legislative bill 690. It's an easy but critical duty to perform, one that only requires a phone call, letter or e-mail to your state senator. And here is another request for the same help and for another very important pro-life bill, a bill aimed at stopping the dangerously irresponsible policies of Planned Parenthood in distributing the abortifacient RU-486 via webcam. Read on.

Julie Schmit-Albin, the Executive Director of Nebraska Right to Life, writes to alert us that LB 521, NRL's priority bill this year, is stuck in the Judiciary Committee. And unless it gets out of there, Planned Parenthood will be able to extend a particularly treacherous form of chemical abortion into the rural areas of the state.

And make no mistake -- treacherous is exactly the word for "telemed" abortion distribution.

Planned Parenthood of the Heartland began such a scheme in Iowa a couple of years ago. It involves an abortionist conversing with a "patient" over a computer web cam and then opening by remote control a drawer which contains RU-486, a very dangerous abortifacient drug. The RU-486 is taken in two doses, one which starts the abortion process and  another a few days later. However, the RU-486 process frequently goes wrong, resulting in heavy bleeding and other severe complications. At least 11 women have died. And, of course, the abortion must be often "finished" by surgery anyhow, thus giving the abortionist a double profit. But at what a sinister price to the health and safety of women.

Remember this is all instigated by the push of a button. No physical examination. And, most important for the safety of the woman, without any medical assistance on hand when those dreaded complications kick in.

Let's not let "telemed" abortions get started in Nebraska.

Julie asks Nebraska pro-life advocates to contact (phone and/or e-mail) the members of the Judiciary Committee ASAP, asking them to release LB 521. Then make sure your own state senator knows your opinions on passing this legislation. Here's a site to help you locate your state senator. And over here you can find out which senators are on the Judiciary Committee. Just look at the top of the right sidebar. And you can also call and leave a message for the members of that committee at (402) 471-2622.
Posted by DH at 10:15 AM