The Numbers Aren't Good for Obama. They're Even Worse for the USA. 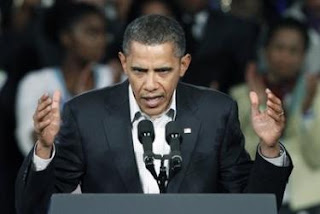 As Barack Obama was delivering his speech on the nation’s long-term debt crisis, word came that JP Morgan has radically downgraded its projection of the nation’s short-term prospects for economic growth. Morgan now thinks the economy will grow at an annual rate of 1.4 percent this year. This comes hard on the heels of Macroeconomic Advisers lowering its growth projection for 2011 from 4 percent at the beginning of the year to 1.7 percent today.

These aren’t just horrible numbers for the U.S. economy. They are a potential death knell for Barack Obama’s presidency...

Read more of "Long-Term Debt? How About Short-Term Implosion?" by John Podhoretz over at Commentary.
Posted by DH at 11:57 AM