Morgan Brittany on the Intolerance of Hollywood 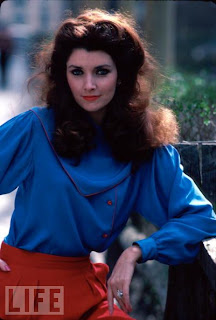 "I'd go out on location with the 'Dallas' crew," Morgan Brittany told members of the California Congress of Republicans in Valencia on Saturday. "Everybody in the van was bashing (President Reagan). I never said anything because I thought I'd lose my job. And I probably would have lost my job. I got to a point later on, after 'Dallas' was over and I had my two children, that I said, 'enough is enough. I'm not going to be silent any longer'," she said.

"If I'm silent then I'm enabling these people and I'm letting them win. They need to know that we're out there. That we're strong and that we have ideas and solutions."

The reaction to her newfound political courage back then wasn't pretty.

"Oh man, the flack I took from the people, the agencies -- 'oh, you can't say that. You can't do that. Casting people might see you. And directors!"'

"What is this, the blacklist?" she said. "They're not going to hire me because I have an opinion? That's the way Hollywood is and, unfortunately, I got that. But I still wasn't going to back down."

Brittany, who was one of the most visible celebrities supporting the McCain-Palin Republican ticket during the last presidential election, has a daughter in her 20s who is a struggling actress. Her advice to her is: "Don't tell them you're my daughter."

Brittany told of building a friendship with actor Ed Asner, a sometimes activist for progressive causes, when the two starred in a stage-play together during the infamous Florida recount that put Republican George W. Bush in the White House over Democrat Al Gore. And she told how she lost Asner's friendship due to politics.

"Every night he just loved me and came in and gave me a big hug," she said. "Then one night he was going crazy about Gore and Bush and stealing the election. I'm backstage and I said, 'Ed, chill, not everybody thinks the way you do'."

"From that moment on, he never spoke to me again, except on stage," she said. "This is what we're dealing with. The intolerance of the left."

She said that while a starlet in her 20s she met with the late Jay Bernstein, who managed the careers of Farrah Fawcett and Suzanne Somers back in the day, but the meeting went awry after Bernstein noticed the cross Brittany wore around her neck.

She said Bernstein told her: "You're going to have to lose that, honey.

"He was a star-making manager, but I couldn't sign on with him," Brittany said...

There's more (including remarks by Clint Howard) in this Newsmax article, "Conservative Actors Bemoan Intolerant Hollywood."
Posted by DH at 10:46 AM