The Islamification of Great Britain 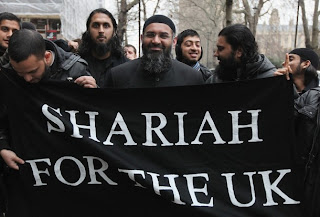 Think on these things for a moment -- and shudder.

In Great Britain, an average of 30 Anglican churches are closing every year. Meanwhile, 70 new mosques are being created in the country.

And the "Islamification" of Britain isn't happening merely by immigration but by conversion too. 56% of the converts to the religion are white. 62% are female.

Alan Wisdom, director of the Presbyterian Action committee and vice president for research and programs at The Institute on Religion & Democracy (IRD), isn't surprised. But he is certainly dismayed. "When you have a spiritual vacuum, something is going to fill it. And the Church of England, and Christianity in Great Britain in general, has become very weak in its proclamation of the gospel. On the other hand, Islam comes in through immigration originally, not afraid to call people to conversion, and the result is that numbers of Britons are converting to Islam. It may be now that the numbers of Muslims who worship every week are greater than the numbers of people worshiping in the Church of England."
Posted by DH at 10:23 AM