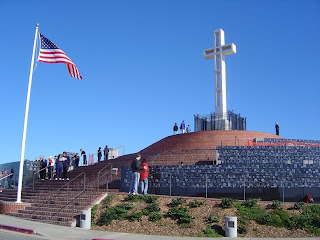 In a much-publicized decision, the United States Court of Appeals for the Ninth Circuit recently decided that a memorial cross at the Mount Soledad veterans’ memorial violated the Federal Constitution. In particular, the Court looked at the First Amendment and examined the issue under the so-called “separation of church and state” mantra. The decision may not seem like much when reported as a news story, but its implications are staggering. Let’s see why.

Imagine a balance scale capable of weighing arguments, so that the weightier side prevails. Here’s the alignment of interests. On one side of the scale, we have a location where a memorial cross honoring veterans has stood, in one form or another, since 1913 – nearly a century. The current memorial has been at the location since 1954, and the area surrounding the memorial is filled with numerous walls of plaques honoring individual veterans. After nearly two decades of relentless lawsuits by the ACLU, the property with the memorial was taken by the Federal Government in an act of Congress to establish a federal memorial for all veterans. By Congressional standards, the action was a marvel of both speed and consensus. More than 80 per cent of representatives in the House voted for it.  The Senate approved the transfer in a unanimous  vote –see many of those lately?

On the same side of the scale with a unified Congress, we also have enormous community support and the opinion of the largest veterans’ organizations in the nation, representing literally millions of veterans.  In fact, the veterans’ groups forcefully described the ACLU lawsuit as an insult to the honor and memory of veterans everywhere. They expressed the surprisingly easy-to-grasp concept that veterans should be able to say how they would like to honor their own. So, on one side we have long-standing tradition, Congress and the President, local residents, and veterans.

What could possibly be placed on the opposite side of the scale to tip the balance? The answer is a handful of individuals who claim to be “offended” by the sight of the memorial. This is not a misprint or misstatement, and now, if this three judge panel has its way, it will be the law for much of the country...

(Read the rest of "Sense and Sensitivity: When a Cross Causes Offence" right here at Mercator. It is written by the Alliance Defense Fund senior legal counsel, Joseph P. Infranco.)
Posted by DH at 7:23 AM