Ernest Borgnine On His Craft 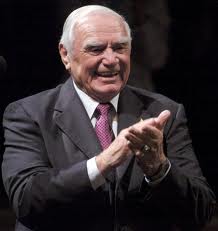 Ernest Borgnine is still working. At 94 years old. And he has some interesting opinions about his industry.

"You want to see real acting, watch the movies on TCM."

"The one who stands out in my mind is Gary Cooper. If you watch him, you can see him listening and then answering in turn. The same is true for Spencer Tracy. He listened before talking. That's what acting is all about. Many actors today don't listen. They speak because it's their turn to speak."

Borgnine isn't sure he'd be an actor if he were starting out today. It's not simply the savage competitiveness throughout the industry, he says, but the kind of movies some producers are making. They are not entertaining and leave no impact, he asserts, suggesting they shortchange actors of quality. "If I were starting over, maybe I'd have spent my career in the Navy," he says. "And by now I'd be getting a pension."

But he is still going strong. Indeed, he has several new projects in the hopper. And he is never too old to learn: He says mastering the art of animation for "SpongeBob SquarePants" was a challenge. When kids are told he is Mermaid Man, "They can't take pictures fast enough," Borgnine notes. "Here I am at 94, still taking bows."
Posted by DH at 10:40 AM