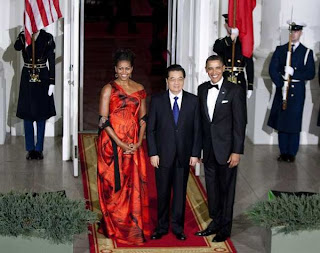 Barack Obama gave Communist China President Hu Jintao a luxurious state dinner, a 21-gun salute and a treasure trove of propaganda for China's emergence as the new star on the world's stage.

What did Obama get in return? Absolutely nothing!

Who did you think would come out on top if you put a tiger and a dove in the same room together to work out their differences?

Yes, those were white bird feathers sticking out of the tiger's mouth at the lavish state dinner hosted by President Obama at the White House this week.

President Hu Jintao is a Tiger Leader. That's kind of like a Tiger Mother, only less nurturing and more demanding.

If you see all that together in one room, bet on the Tiger...


Hurt then goes to detail the latest cave-ins of the American government to that of Communist China. Sad, infuriating reading.

In a related story, there were some efforts to hold Hu Jintao accountable for China's cruel abuses of human rights but they didn't come from the White House. They came rather from Congressional leaders like John Boehner and Nancy Pelosi.

Not surprisingly, of course, Hu treated the questions with his usual haughty disrespect and disregard. For, let's face it, the Chinese dragon does whatever it wants nowadays. It persecutes Christians and others of conscience. It employs a draconian one-child policy that forces mothers to abort their babies. It runs slave labor camps. It murders prisoners and sells their organs on the open market. It spies on America; steals her military and technological secrets; undermines her policies around the world; supports terrorism against her; runs an amazing trade deficit; devalues her currency; and buys up her real estate.

And what action does the U.S. President take? "You enjoy that Nebraska steak, Jinny? Here have another shrimp. And some spinach that Michelle grew. We will do everything we can -- and I do mean, everything -- to keep you happy."
Posted by DH at 12:00 PM