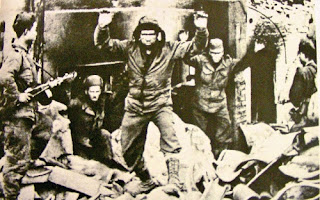 As explained in the post above, the socialist, apologetic Dove (Barack Obama) absolutely refuses to be offended by the Chinese Tiger -- no matter what that Tiger gobbles up or how mean-spirited his brutish actions.

You know this. Nevertheless, this story will still knock you down.

By the way, in addition to the American POWs captured (as shown in this photo), the U.S. 7th Infantry Division lost 365 soldiers killed in action in this battle.Many of our South Korean allies were killed and wounded too.

And a song celebrating this Chinese victory is sung at a lavish state dinner in the White House? And White House staffers are not indignant even after the fact? You couldn't make this stuff up!
Posted by DH at 11:50 AM