China Takes Over. And Obama Is Just Fine With It. 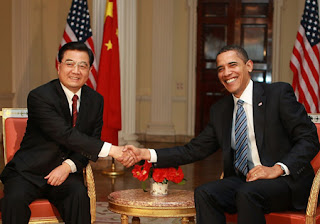 ''If China becomes the world's No. 1 nation ... ." That was the headline in the official newspaper of the Chinese Communist Party, The People's Daily, on the eve of Chinese President Hu Jintao's state visit to Washington. The article went on to boast how "China's emergence is increasingly shifting to debate over how the world will treat China, which is the world No. 1 and has overtaken the U.S."

A story like this does not appear by accident in the official Chinese Communist Party newspaper on the eve of a state visit to the world's (current) No. 1 power, the United States.

It was a signal. The latest and boldest signal yet that China intends to become the world's No. 1 power.

President Obama took the occasion of his first visit to China to show "humility" and to assure his Shanghai audience that "we do not seek to contain China's rise."

The Chinese communists are taking the occasion of their first visit to the Obama White House - not to show humility, as Mr. Obama did to them - but to openly show their clear intention to dominate the world from the Middle Kingdom...

The above is taken from an important Washington Times story by Micahael Prell. And the next paragraphs (from CBS News "Political Hotsheet) emphasize how downright enthusiastic Barack Obama is about China's new position as #1.

China's rapid growth is often painted as a threat to American interests. But President Obama said today that the country's economic progress benefits the United States and opens the door to greater international stability and humanitarian progress.

"We welcome China's rise," Mr. Obama said at a press conference at the White House with Chinese President Hu Jintao. "I absolutely believe that China's peaceful rise is good for the world, and it's good for America."

He added, "We just want to make sure that that rise occurs in a way that reinforces international norms and international rules, and enhances security and peace, as opposed to it being a source of conflict either in the region or around the world."

And how to insure this power shift goes smoothly? Surrender with a smile. Throw a big party for the winners. And try and convince the American people that China will be good to them.

And without a whimper from the Obama administration. Or, for that matter, from the crowds of Americans who cannot see past today's Made in China bargains at Wal-Mart.

In addition to America's moral collapse (rampant rates of abortion and divorce, violence in the streets, coddling of criminals, the welfare state, the marginalization of Christianity while promoting false religions and secularism, materialism)...indeed, probably because of America's moral collapse, its political and economic elite are willingly surrendering to thugs.