You Object to Being Groped? What? Are You Not Patriotic? 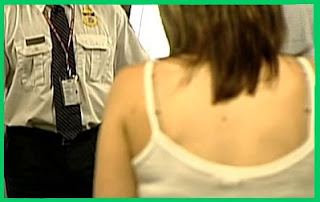 Despite officials' insistence that they had taken care to prepare the American flying public, the flurry of criticism from private citizens to airline pilots' groups suggested that Napolitano and other federal officials had been caught off guard.

In other words, you, the citizen, are supposed to endure whatever the Nanny State orders you to do. In Janet Napolitano's mind, that's your role.

Forget about the 4th Amendment. Forget about the injustice of innocent people being treated like criminals. Forget about standards of personal privacy and decency. And, while you're at it, forget about all of the huge holes in our nation's security that the Obama administration's Homeland Security is doing nothing about: the borders, the ports, waves of illegal immigrants, the pro-terror groups inside the U.S.

And "caught off guard?" For crying out loud, how could the government assume that such intrusive procedures as dangerously radioactive naked body scans and groping hand searches would not create a firestorm of protest?

Once again, the government under Barack Obama, has shown itself mindlessly out of touch with the American people, arrogant, completely indifferent to the U.S. Constitution which expressly prohibits unwarranted searches, and oh-so-willing to get tough and aggressive not with criminals but with innocent American citizens!

Republican Congress, are you listening? TSA reform cannot come fast enough.
Posted by DH at 7:59 AM