What Flo Isn't Telling You About Progressive Insurance 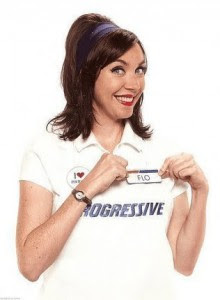 How about the fact that Progressive Insurance boss Peter Lewis (described by Forbes as being worth more than a billion bucks) is one of the major contributors to leftist causes in the United States.

Like $16 million to the Joint Victory Campaign, $2.5 million to Move On. Org, and $2.9 million to “America Coming Together,” an organization he and George Soros put together to defeat George W. Bush in the 2004 presidential election.

And then there's more millions over the years given to the Democrat Party. And the ACLU. And campaigns to legalize pot.

Lewis himself claimed in 2004 that he had given away $250 million. He's bankrolled the extreme left with a lot more since then.

Keep these donations in mind the next time you see a Progressive Insurance ad on TV. And pass it on.
Posted by DH at 8:00 AM