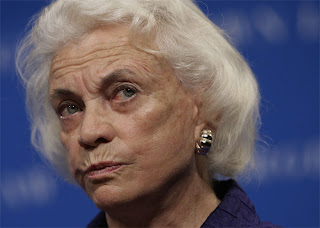 Former Supreme Court Justice Sandra Day O'Connor has violated the Code of Conduct for United States judges. She should resign from her position as a roving judge on "senior status." If she doesn't resign, Chief Justice John G. Roberts Jr. - at whose sole discretion she serves as a "pinch hitter" on lower federal courts - should no longer designate her for such duties.

In a controversial case Tuesday before a panel of the 9th U.S. Circuit Court of Appeals, Mrs. O'Connor provided the deciding vote in a 2-1 decision to throw out Arizona's requirement that new voter registrants provide proof of citizenship. This was not just another lousy decision in Justice O'Connor's long record of uneven jurisprudence. The deeper ethical problem is that she is active in political causes while continuing to serve as a judge...

You knew Sandra Day O'Connor was a very bad Supreme Court Justice -- inconsistent, unprincipled and not the brightest bulb in the pack. You probably suspected she was a lying opportunist too. After all, she managed to slip by Ronald Reagan's legal investigators, posing as a judicial and moral conservative when she was, in fact, neither.

Nowadays, even though she's off the Supreme Court, she's still hurting America and the cause of justice by serving as a "guest judge." O'Connor is turning out horrible decisions; she's engaging in illegal political activity; and, despite the obvious evidence of her wrongdoing, she's lying about it like some stupid schoolkid.

The arrogance of this bunch knows absolutely no boundaries.

But, for goodness sakes, don't stop here. You gotta' read the rest of this excellent Washington Times editorial.
Posted by DH at 10:01 AM