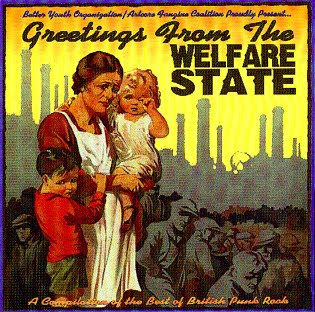 Listening to the banging drums of French strikers marching at Place des Invalides, in the shadow of the Eiffel Tower, I knew that I was listening to the death rattle of the welfare state. I and many others had predicted this moment; not an amazing feat if one simply did the math.

The French strikers will persist in their pleas and in their desperate acts of sabotage, but the outcome of this showdown is already certain. The money for Frane's luxurious post-war welfare state is gone. French demographics have inverted. There are too many retiring at 60 and with too few workers and future workers to keep the system going. The French government has been funding their retirement system with debt. But now, staring at the prospect of Greek-style insolvency, if even remotely, Nicholas Sarkozy knows he must pull the plug, and he will, even if it kills his political career...

Across the channel, news stories declare Britain "broke" as it's announced that London is looking at cutting a half million public sector jobs. Economists in both countries have told me their nations keep going only thanks to creative accounting and new borrowing. In June, a respected French economist told me that without a radical change of course, the world would wake up one morning and discover that France was suddenly in a Greek style mess. But unlike Greece, France is not "too big to fail," it is too big to save. If France defaults, there is not enough collective EU cash to right the ship. The French had to do it themselves. And that's what we're witnessing now.

The Europeans look across at America, with its huge Obamacare and Tarp and trillions in bailouts, and they are dumbfounded that Americans would decide to explode the size of their welfare state at the very time Europeans are so visibly and desperately trying to escape it.

Washington, take a clue from the tear gas. An era is ending.

(Dale Hurd, CBN News Senior Reporter from "Death Rattle of the Welfare State," the most recent post on his blog.)
Posted by DH at 10:22 AM