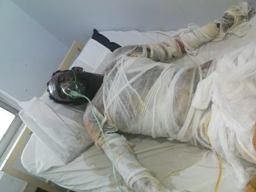 Arshed Masih 38, is still fighting for his life in Holy Family Hospital in Rawalpindi, a city not far from Pakistan’s capital. With the help of police, Muslim extremists last Friday set him on fire for refusing to convert to Islam and raped his wife, local sources told AsiaNews. The incident occurred in front of a local police station.

In 2005, Masih and his wife began working for a wealthy Muslim businessman, he as driver and she as his wife’s maid. Recently, the two fell out of favor with their employer and his family because they insisted on remaining Christian.

During the incident, Masih’s wife, Martha, “was raped by police agents,” local sources said. The couple’s three children, ranging in age from 7 and 12, were forced to watch their parents being brutalized...

There's more of this tragic story from Fareed Khan over at Family Security Matters. And you know you'll not see this story (or any of the hundreds that tell of similar outrages by Muslim fanatics around the world) in the mainstream press.
Posted by DH at 9:39 AM