The Simple Answer to the Ground Zero Mosque? Listen to the Aliens. 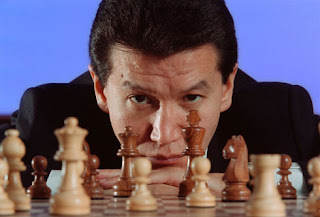 Had enough of the controversy surrounding the Ground Zero Mosque? Well, Kirsan Ilyumzhinov, the powerful Russian politician, millionaire, Buddhist, leader of Kalmykia (an oil-rich region on the Caspian sea), and close ally of Vladmir Putin, has come up with the answer.

And it's all so simple really. Just build instead a $10 million, 24-story World Chess Center on the site. The building would appear as a giant king piece and inside would be housed a mosque, a church, a Buddhist temple, synagogue, a chess school, and a bank of computers to coordinate online chess competitions around the world.

There will also be (in the king's crown) a state of the art observatory for star gazing. Outer space is quite important to Mr. Ilyumzhinov, having already been there in person in 1997 when extraterrestrials took him aboard their spaceship for a chat. That's where it was confirmed to him that chess was brought to our planet by aliens.

And you'd better take this as doggone serious too because Mr. Ilyumzhinov warns us that if Earthlings disrespect the aliens by not playing the game enough, they might destroy us. Checkmate indeed.

There's no word yet on whether NYC Mayor Bloomberg is taking the offer seriously but perhaps he should. After all, Mr. Ilyumzhinov usually gets his way. He has, for instance, governed one of Russia's richest regions for two decades. He built the largest Buddhist temple in Europe. Frequently accused of corruption, one of his top aides was convicted for the murder of an opposition journalist. And his autobiography has such chapter headings as "It only takes two weeks to have a man killed" and "Without me the people are incomplete."

It might be an offer Mayor Bloomberg can't refuse.

Here's more from The Independent.
Posted by DH at 10:21 AM