The Sewage in Our Schools 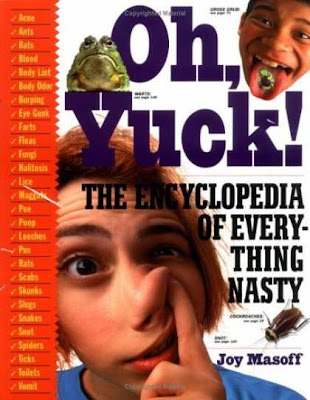 Everyone agrees that if boys don't read well, it's because they don't read enough. But why don't they read? A considerable number of teachers and librarians believe that boys are simply bored by the "stuffy" literature they encounter in school. According to a revealing Associated Press story in July these experts insist that we must "meet them where they are"—that is, pander to boys' untutored tastes.

For elementary- and middle-school boys, that means "books that exploit [their] love of bodily functions and gross-out humor." AP reported that one school librarian treats her pupils to "grossology" parties. "Just get 'em reading," she counsels cheerily. "Worry about what they're reading later."...

This Thomas Spence article in the Wall Street Journal describes how once noble publishing houses are going down a rotten road indeed in their efforts to get kids reading. Let me warn you -- just reading the titles of the books these folks are producing for America's children will likely gross you out. But much more to the point is your careful consideration of how corrupt, profane and counter-productive America's "educators" have become.

My wife Claire used to deal with the problem this article presents (the lack of desire among high school kids to read) in a much different, much healthier way. For even in her classes of "special needs" kids, underachieving students who had records with bad behavior, low performance and so on, Claire was very successful in interesting them in genuine literature. Entry level, perhaps; but healthy literature in its own right which also developed their interest in and proficiency with reading other things.

Arthur Conan Doyle's Sherlock Holmes stories were a great help in this endeavor. So were Mark Twain's heroes of Tom Sawyer and Huck Finn. Robert Louis Stevenson, Edgar Allan Poe and other writers of classic short stories were a part of the regimen as was -- gasp! -- dramatic readings of poetry!

And the kids dug it.

Claire opened a few doors for them but soon, many of her students learned to open the doors for themselves. Kids who had been relegated to the junk pile (the course work assigned to them before Claire took over the job included comic books, movies and telephone etiquette) now were developing the curiosity, the confidence and the reading skills to take them into their own adventures. That's education.

How much more elevated and enriching (for individuals and the general culture) is Claire's example, one that is typical of how education used to be conducted by parents and teachers in America, compared to the schlock and sewage that Spence describes in this WSJ article.

It is another tragic case of the intellectual suicide of the West.