The "Schizophrenia" of Legal Abortion 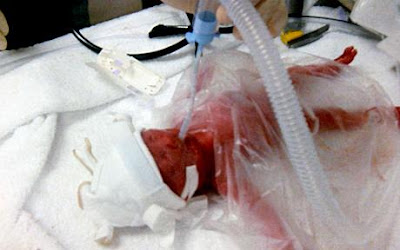 ''When they see her now people don't believe me when I tell them how premature she was.''

That's Lexi's Mom talking about her daughter, born 14 weeks premature at Worcestershire Royal Hospital and weighing in at 14 ounces.

But that was almost three months ago. Lexi is now tipping the scales at 5 and a half pounds and is doing quite well, thank you.

Sandra Day O'Connor once admitted that legalized abortion was on a "collision course" with medical technology. She was, of course, correct. For the science of fetology has made the immorality of abortion crystal clear to the whole world.

Furthermore, the advances in medical care (increasing success with premature births, developments in fetal surgery, etc.) stress the same brutal reality; namely, that abortion is an unjust and unnecessary act of violence against developing boys and girls.

The schizophrenia in our culture that sees doctors heroically working to save preborn children in one wing of a hospital while abortionists dismember, smother, poison and in other barbaric ways, murder preborn children in another wing also puts us on that same "collision course."

But how many boys and girls...how many Lexis must die before that day comes?

(Thanks to Abraham Serafino for alerting me to this story.)
Posted by DH at 12:26 PM