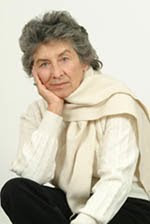 One wonders if either the Canadian Arab Federation or the Canadian Islamic Congress are very concerned about Muslim intolerance, Muslim persecution of Christians and Jews, jihad training, and support (let alone, promotion) of Muslim terrorism.

Right. I don't think so either.

Yet both groups had the brazen gall to demand that Toronto Police monitor for hate crimes and incendiary speech a conference called “On The Front Line of Immigration, Terrorism, and Ethno-Politics.” The reason for their intolerant paranoia? Because the conference featured such speakers as Bat Ye’or, a small, gentle septuagenarian author whose family were among the more than a million Jews forced to leave their native Egypt in 1957.

Bat Ye’or is greatly feared because she calmly but passionately tells the truth about Muslim culture and history in such well-researched, highly-acclaimed reference works as Eurabia: The Euro-Arab Axis.

And that's why Canadian Muslim leaders wanted police help to keep her quiet.

“It is, I suppose, deeply ironic that I was told that I was not allowed to live in Egypt when I was a girl and now as a grown woman I’m told, in part by people from Egypt, that I shouldn’t come to Canada either. As for Israel, they’d like that to disappear...Where ought I to go? No matter. The story has to be told, the true story of how Islam has treated and still does treat its minorities.”

Bat Ye’or’s name is, as you might guess, a pseudonym. It is Hebrew for "Daughter of the Nile," itself a dramatic reminder of the personal pain in her past as well as a symbol to inform others of a tragic injustice that the world has deliberately refused to speak of.

Michael Coren has more, much more over at Mercator.

...It is her collection of work on the Islamic conquest of the Christian heartlands of Egypt, Palestine, Syria and North Africa that have caused so much frustration from Muslim opponents. She writes in detail of Dhimmitude, the method in which Jews and Christians were subjugated and humiliated.

It is her collection of work on the Islamic conquest of the Christian heartlands of Egypt, Palestine, Syria and North Africa that have caused so much frustration from Muslim opponents. She writes in detail of Dhimmitude, the method in which Jews and Christians were subjugated and humiliated.

“As late as the early twentieth-century in some Muslim countries Jews had to remove their shoes when they left their own quarter, were not allowed to ride a horse, were treated as second-class citizens. This idea of equality is nonsense. Their numbers were restricted, especially in the Holy Land, and the same was true of Christians. There were periodic pogroms, right up till the 1940s.”

A pause, searching for the right words. “What occurred back then is history, but history has to be understood and accepted. What we have now is revision, denial. Muslim immigrants are taking this false idea of the past to Europe and North America, along with a culture that does not share the Western notion of tolerance, equality, criticism of religion and freedom.”

The concept of dhimmitude is little known in the West but Bat Yeor is doing a great deal to correct that state of affairs.

“The whole notion differs fundamentally from the Western, Christian idea of tolerance” she explains. “Obviously Christians have not always lived up to this idea but modern pluralism is a direct result of Christian thinking. Islamic ideology, on the other hand, aspires to something entirely different. At best it is a paternalistic tolerance for a despised minority but often outright persecution..."

So the idea of Islamic tolerance is untrue?

“Completely so. Dhimmitude is the natural consequence of the jihad mindset. As a Muslim you conquer, dominate and convert because Islam is to triumph. That you would then respect those who do not become Muslim is self-contradictory. Those who reject Islam are considered immoral and the immoral are never to be trusted. This is why it is so difficult to form a working relationship between the West and genuine Islam, even when it appears to be moderate. We have to question motives, we have to understand intentions.”

This thesis of the spread of such ideas is discussed at length in what may be her most famous and controversial book, Eurabia: The Euro-Arab Axis. In it she argues that Islamic fundamentalism has found its way to Europe because most Muslim moderates are frightened of speaking out and European intellectuals and activists have been seduced by its anti-American dynamic.

“I cannot stress enough the incompatibility between the concept of tolerance as expressed by the jihad-dhimmitude ideology, and the concept of human rights based on the equality of all human beings and the inalienability of their rights. In Europe there is a connection between local socialism, communism and neo-fascism with the judeophobia and anti-imperialism of the new Muslim communities.

“There are courageous Muslims who do resist but it is difficult and dangerous. There is an underground of sharia law across Europe, with terrible treatment of women. This is combined with the threat of violence aimed at anybody who speaks out against what is going on. Censorship through fear. We even see this to a mild degree in Canada, an example being the attempt to stop me entering the country...”
Posted by DH at 11:22 AM